written and directed by david durston

A dyed-in-the-wool exploitation quickie, the only thing surprising about this little absurdity is its relative restraint. Don’t get me wrong – there’s plentiful wallowing in sleaze here, but it’s kinda presented as an afterthought. Sure, limbs (and a head) are hacked off, and multiple animals are slaughtered, but the sexual assault happens off camera and minimal nudity is shown, even when it’s implied that an entire construction crew runs a train on an overly willing female. True, the sleepy little town goes haywire after a young boy injects meat pies with rabies-infected blood and sells them to a roving band of hippies … hmmm. Perhaps this reviewer has grown jaded. BE THAT AS IT MAY, this film mainly revels in its presentation of the idiotic “satanic” pretensions of the ill-defined “cult” at the center of the action, and dwells lovingly

on its ensuing violent insanity. Ultimately, the picture descends into a disjointed and haphazardly edited sequence of uncompelling chase scenes. Those where the survivors defend themselves with water display a highly entertaining ignorance of why the deadly disease was once known as “hydrophobia.”

I’ve got a reputation to uphold. 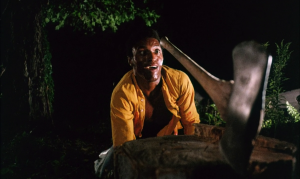 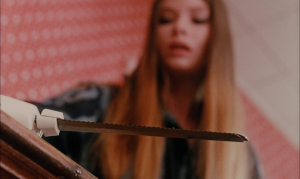 The cult leader’s opening oration includes “Satan was an acidhead” and “together we’ll all FREAK OUT!” Additional period dialogue adds this observation: “He’s not drunk, stupid, he’s been doped – with that stuff that they call ‘LSD.’” The sometimes alarming soundtrack often alternates between hypnotic monotony and electronic experimentations.  Bonus points were granted for a character using the phrases “the colored boy” and “the fuzz” in the same conversation.