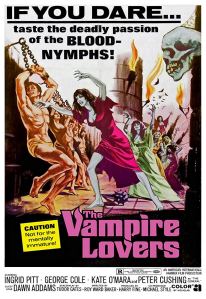 This soundstaged costume drama takes a while to build up any steam, but when it eventually does, it rips bodices with the best of ’em. Figuratively, I mean; despite the robust sapphic undertones of this first-of-a-loosely-formed-trilogy of films derived, again, from J. Sheridan Le Fanu’s Carmilla, no clothes are torn away in any frenzies of lust. Suitably gothic, and chockablock with little details we all should recognize from the classic Dracula legends, the film shows admirable restraint in not unleashing the deadlier side of Ingrid Pitt’s enigmatic evil paramour until it’s nearing its torrid climax. That may make this picture sound a little more exciting than it is, but it does redeem itself rather nicely. 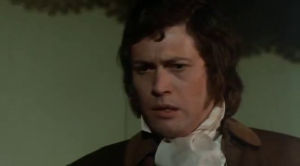 This is the picture I intended to see when I instead watched Kiss of the Vampire, which was probably provoked by my experience with Vampire Circus, which I viewed because of its name.

It’s probably more faithful to the novel than The Blood Spattered Bride, should that matter to you. (I cannot confirm or deny that supposition, as I haven’t read the source material … yet.) 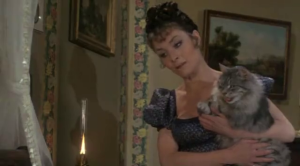 Kate O’Mara’s governess and Madeline Smith’s Emma are delightfully rendered portrayals, and Kirsten “Betts” (Lindholm) gets the magnificent credit of “1st Vampire.” Scenes shift abruptly at times, some lack of communication is both unfortunate and somewhat unlikely, and there’s a mysterious, portentous onlooker whose role doesn’t amount to anything. As before, the revelation of the identity of the vampiress lends itself to mirth (her various names are anagrams, and it only dawns on folks after it’s far too late). The deaths of the familial vampires are remarkably easy to effect.