written and directed by jose larraz

The kind of picture that would’ve been better off not explaining the what or why of its anonymous slayings, this unexceptional slasher potboiler nonetheless manages to do quite a bit with almost nothing. It’s generic, sure, and its cast of unknowns could’ve done a much better job delivering their lines convincingly, but the air of menace is effective enough that the deceptive clues don’t displease too much. Surprisingly low on exploitation factor, given that there’s a nude dead female lavished across the screen at the 1:39 mark, this film revels in setting scenes in fumbling darkness, and boldly employs the ruse of the faux savior for good measure. Its ensemble of young adult characters, however, don’t quite match the usual stereotypes, and law enforcement is neither pointlessly obstructive nor dismissively inept. The story is no more ridiculous than you’d guess, probably.

The director, who was known to have used three or four pseudonyms, has quite a record of exploitation horrors to his credit … one of which I’d unwittingly previously reviewed!

Despite its lack of ambition, it was actually pretty entertaining for the most part. 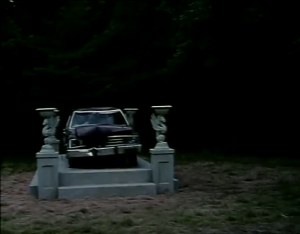 The constant smirking of the red herring character adds a mischievous touch, and some of the pathos on display is almost convincing at times. The hallucinatory sex scene dream sequence is rather a surprise, in that it’s not one of the main cast’s young ladies that gets naked, and the fact that the group of weary travelers stays in the title abode despite its appearance – and one of their own’s premonition – is the staff of life for this entire genre.