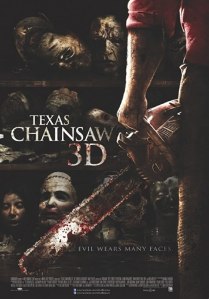 I’ll say this much: before you figure out where this picture is heading – which is about when you might want to stop watching – it’s a fairly worthy successor to the debut, even if its opening completely rips off that of The Devil’s Rejects. Not unlike every other film bearing any relationship to the title “Texas Chainsaw Massacre” – checkered as that past is – it also leaves way too many questions unanswered, questions which needn’t ever have been raised in the first place. Oh! And as it lurches through its climax, it also borrows an extended scene (and attendant manner of grisly demise) from Slaughterhouse. For all that – and I’m including the ludicrous backstory and character development of the newest family member – it’s a gripping watch … at least until our poor heroine gets “helped out” by the police, anyway. After that, it’s just more of the same hot garbage churned out in the name of the TCM franchise by those who won’t leave bad enough alone.

A clip from it posted somewhere led me to the trailer, which twisted my arm.

Hooper and Henkel’s 1974 success was a serendipitous feat, and nobody seems willing or able to countenance that fact – including them. (They’re two of approximately 137 “executive producers” here.) It’s less perfunctory than the 2003
reboot, for whatever that’s worth.

This film does not skimp on sickening gore, presented for the most part with exquisite care, so if that happens to be your bag, one indelible scene in particular is calling your name. The resolution of the storyline is a mess, the loopholes and oversights mount alarmingly, and the scattered signifiers of the original seem desperate.