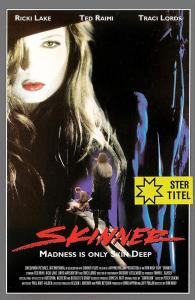 Get this: he skins people! Like, no way, right!? Now, with that out of the way, it’s time to admit that despite some obvious shortcomings, this is a strangely effective independent horror, with a cast that includes Ted Raimi, Ricki Lake and Traci Lords. Right, it’s very ’90s – that’s one of the shortcomings. But there’s very little of significance to gripe about here,

even if some of the picture’s more potentially symbolic fascinations go more or less unexamined. The ending really could’ve used a better (and less derivative) concept, and like execution, but after the title character has finally shown his inner self, so to speak, that’s forgivable. I cannot stress enough, however, that even were you initially unaware, you’d immediately be able to peg the era of release.

As a longtime scourer of budget bins of all stripes and a onetime video-store regular, I felt as though I’d neglected this title too often. And Ted Raimi, of course. 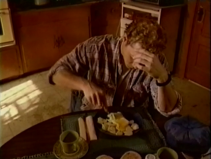 After some thought, I’d have to classify this picture as being of the sort you’d likely find fairly interesting and enjoyable should you happen across it, but not one worth any arduous journey to experience.

Ricki Lake is delightful, per usual, and David Warshofsky’s bootleg rendition of post-1987 Anthony Michael Hall amused me for no particular reason, as did the fact that his character is named “Geoff Tate.” (It’s irrelevant whether that was intentional.) The explicit scene where a prostitute is flayed is technically astounding. Traci Lords plays a character who for no
pertinent reason is perpetually underdressed. SHOCKING, I know.