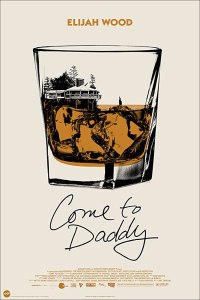 What seemingly begins as a relationship experiment – with hints vaguely reminiscent of the discomfort underpinning Creep – abandons that tack fairly quickly as it heads into somewhat more traditional territory. In this story of a man uncertainly meeting up with his long-lost father, it shouldn’t take one too long to spot the first plot twist as it approaches, and since the second one is closely allied, its revelation should follow appropriately at its heels. Afterward, the oddball is mingled with the ordinary, but the whole affair remains captivating throughout, never quite succumbing to becoming predictable. Near the end, there’s a chance for it to toss in a devastating conclusion, but this production is content with an enigmatic and cinematic finish. Once the effect wears off, as usual, if you give any of the happenings a second’s thought the whole construct collapses … so, as usual, you shouldn’t do that. This feature’s a font of black humor, indeed, so dark and quirky you may well miss some of it.

It works for a lot of different reasons, and probes emotions and their attachments on many different levels.

I don’t recall having seen Elijah Wood act before, though The Faculty is on his CV, so I must’ve, and Timpson was a producer of but otherwise uninvolved in 2015’s rhapsodic Deathgasm, so I didn’t have any preconceived notions about either of them. The direction was splendid and Wood’s performance is almost as profound, after taking a bit to establish itself. Some of the supporting cast tends toward excessively broad caricature at times, or is perhaps a bit too self-consciously outré.