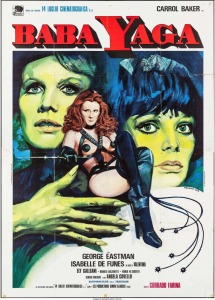 Definitely the first film I’ve seen based on the erotically charged comics of Guido Crepax, this Italian tale of intrigue – and, you know, deadly puppets dressed in S&M gear that can manifest in fleshly human form – is, first and foremost, an examination of artful-nude studio photography vis-à-vis commercial filmmaking. And an attempted meditation on taste and the merits of artistic forms. Plus, of course, chic fashion, lots of chic fashion. Events never get very frightening, although the ending scenes contain some interesting and eerie moments, and the big reveal that sets them up isn’t without impact. The way things wrap up renders much of the story really kind of pointless, though because of the multiple erotic death dream sequences, at least you could toss “questions of conscience” into the list up above. Don’t know what to make of the Nazis or the other military imagery. 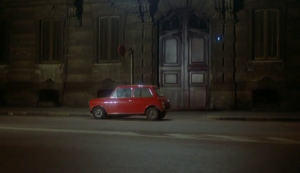 I mean, I saw the title “Baba Yaga, The Devil Witch.” I didn’t even know about the Crepax connection until the title cards showed. 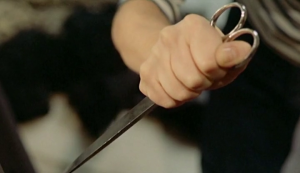 It’s amusing in a kitschy way, but apparently impossible to see in its intended form. (Footage that may or may not contribute to the film’s cohesion was excised without the director’s consent.) The version I watched contained some scenes inserted from work prints. 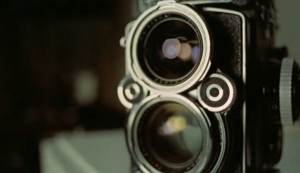 There are dandy pseudophilosophical musings such as “If you don’t use the means that the system provides, what other possibilities have you got?” Mind you, the characters sharing this exchange are pretty far from revolutionary types. It’s also pretty moving when the pseudo heroine, Valentina, icily exclaims, “I couldn’t care less about … power and riches and your cosmic secrets!” 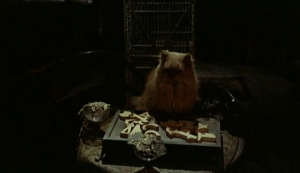