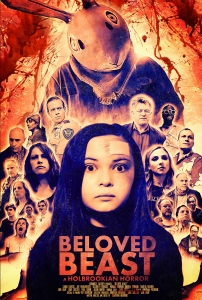 An independently produced horror picture with a complex if not exactly visionary storyline, this film suffers a bit from some copycat conceptualization, but more from abysmal pacing. It’s not that it’s nearly three (3!) hours long – 2:53:15 – but that the delivery of the dialogue is too deliberate by half. There’s no rhythm or carry to the conversations; everyone seems to be a half-beat off and a second too slow. This abets some scenes, as a hazy, dark undercurrent runs through much of the operation, but otherwise it can be a bit off-putting. Also, the cinematography often looks cut-rate, too digital, too sharp. And if you wanted, I guess you could quibble with some of the performers’ chops. But! It’s an impressive accomplishment nonetheless: A little girl is orphaned by drunk driving, goes to live with her aunt who couldn’t possibly care less, befriends an escaped mental patient with a proclivity for massacring every living person he encounters. Oh, and there’s a fairy-tale conceit and a nasty crime ring involved, plus a weather-worn and sardonic sense of naturalism. Don’t let my faint praise be too damning.

I don’t recall; it’s been waiting on the list for nigh on a year.

Not if you have an attention deficit.

The filmmakers – cast, crew and production staff intermingle – delve ever deeper into the more awful side of the oxymoronic term “humankind” without seeming to revel in it for the sake of spectacle. That being said, what should be an unrelentingly bleak experience never quite plunges that low, prodding to the fore some potentially unsettling ruminations on one’s conceptions of compassion and moral judgment. Contains a few passably witty allusions.