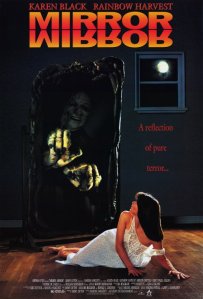 It’s not too promising that I must point out that this film is all right up to the point the EVIL starts to run amok. After that it spirals downward in a big hurry, and it almost seems as though the filmmakers didn’t really have a plan for handling that portion of the script. That this flick manages to be any good at all is sort of a minor miracle, given that it’s burdened with plot tendrils that don’t go anywhere in particular, and boasts a lead role consisting largely of a Winona Ryder impersonation. Additional performances are supplied by the erstwhile Lily Munster and the guy who at the time was widely known for playing a yokel on Newhart. (The world was smaller then.) Also, a death-by-hot-shower scene reminiscent of that in Island of Blood occurs concurrently with one of the water polo gym classes, so that’s covered. This movie has three sequels, and although maybe you could see the cockamamie ending of this one meriting a follow-up were you to squint your eyes and hit yourself over the head repeatedly, the serials seem to have little in common save the presence of a demonic looking-glass. (Installment 2, “Raven Dance,” at least appears to share stylistic elements.)

Much as we’ve all personally wondered so many times, the blurb ponders, “Is the mirror a reflection of Megan’s own inner demons … or has she unwittingly opened the doorway of the damned?”

One character informs another, “We have to close the opening.”

The blue-filtered shots from the mirror’s POV are pretty nifty. The FX invoking an ill wind are the opposite. Most characters are but mere ciphers. 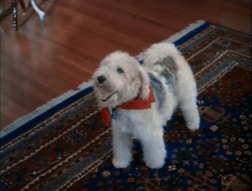