Boy howdy, you’d think that if you were going to wait 15 years to come up with a sequel to – oh, wait, I just used that opening. But yikes, Dave, does it ever apply here. Now, on one hand, it’s commendable to follow up the rampant insanity and psychotic humor of Baby Blood with a movie that’s altogether serious; not playing to expectations can be a strong artistic move. Grafting the referential portion of the script onto a confusing subplot involving vicious gangsters, however, makes less than no sense at all, it actively makes for unnecessary confusion. (I mean, the gangland subplot doesn’t even make much sense on its own, let alone intermingled with the body-jumping murderous horror that was Yanka’s beastly baby the first time around.) Oh, yeah, Yanka’s a police captain now, just in case her evading all suspicion and capture throughout the first flick wasn’t unbelievable enough. And she’s got a human baby, too … BUT FOR HOW LONG. 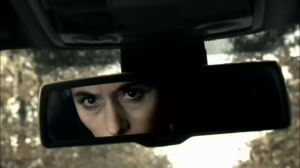 I loved the demented original, and I’m a fool. 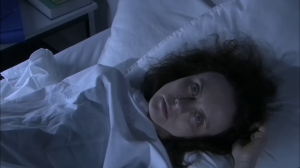 I cannot urge you too many times to watch 1990’s precursor instead.

Seriously, as I’m writing this, I’m thinking about other aspects of this movie that are either confusing or pointless or just don’t work. Aside from one especially nifty detail near the very finish that you’ll miss if you blink – the camera ignores it almost entirely – nothing much stands out. (That it appears to be an unconscious design afterthought is stunningly effective.) All the action, drama and horror takes place in that same brief scene as some ends are loosely tied.