Oh, hey, look – it’s Aldo Ray again. Taking part in this ridiculous picture for exactly the reasons you’d surmise – he desperately needed some cash – he infuses his lines with all the believability of, say, a parrot. Not that authenticity is an important factor to a movie such as this, which more than anything else calls to mind the SF epics of the Atomic Age, made for as little money as possible, with whatever was lying around. The story revolves around a scientist tapping psychic powers to something something, and now there’s an alien life form. (It’s the director’s child in a costume that isn’t half bad, somehow.) This is the type of flick that features scenes in high desert areas because there’s no need for any sort of permits, the kind where all the various members of the “U.S. Army” sport mismatched “uniforms.” For its concluding statement, this production doesn’t even bother pretending it’s serious at all, leading one to reflect as to whether it ever had been. Pretending, that is. 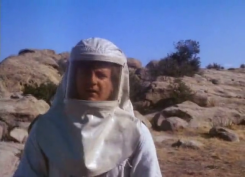 My brother sent me a picture of the VHS box.

Allegedly, Fred O. Ray made his first feature on a budget of $298. (And the white mouse will not explode, either.) And he allegedly paid A. Ray a thou for this one.

I should stress that I’m unsure this movie is deliberately crummy by means of emulating the good ol’ days. I mean, I think the dialogue is as bad as it is without undue pretense, and the acting, too. That it wasn’t aiming any higher is a given, but the nonnegotiable parameters involved
pretty much guaranteed the outcome.