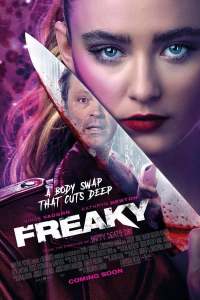 I will freely admit – I have to – that I’m a sucker for this exact sort of flick, to the extent that I knew I was going to like it as soon as I read a review of it. And I put off watching it for some reason anyway. So, yeah, here’s another Blumhouse comedic horror romp, and boy is it ever of the moment. A body-switching gender-defying mockup slasher spoof of “Freaky Friday” and its ilk, it even manages to worm a little bit more tension out of some of the hoariest of the genre’s tropes. Men’s rights advocates probably won’t like it much, and who the hell knows whether the newly minted Science-trusters will denounce it while busily insisting they’re defending the natural rights of biological women. Why, there could be ammo for the cancel-culture-cancellers, too! Now THAT’s inclusive!

, I already done TOLD ya! I’m like a moth around a light bulb for this kinda thing.

I will go ahead and presume it will not suit everybody’s taste. Hell, it could even seem like outright trolling in some regards, I suppose. But here’s the thing: Times change. Seasons change. But this movie is bloody entertaining. (Literally, of course.)

Vince Vaughn is tremendous in this picture. Which may be surprising to you, should you not be aware that Vince Vaughn is still a guy who acts ‘n’ such. Hey, it caught me a little bit unawares. And see above comments about aggressive agenda-pushing. I mean, look, that’s a big part of what’s behind the whole premise here, but … certain people take their cues from certain people they know, if you catch my drift.

Rating From Outer Space: A−