Produced and Directed by Armand Weston 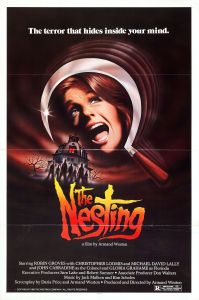 For the most part, this is a straightforward old-haunted-house yarn, but it has a couple peculiarities that are gonna leave you wondering. The basic story is, well, basic: successful novelist rents a country home for rest, relaxation and writing, but wouldn’t ya know, something’s amiss. For one thing, she keeps having these weird dreams. For another, she’s agoraphobic, which isn’t the best trait when your residence starts frightening you. Then there’s the small matter that the house itself was depicted on the cover of one of her previous novels. Throw in a threatening drunken handyman, various oddball locals, and intrusive hallucinations, and you’ve got your hands full. Pretty good overall, but oh, those few production quirks … 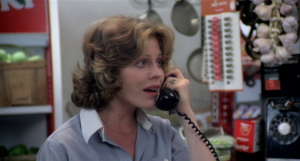 To reiterate: I selected some of these titles quite a while ago, and haven’t the foggiest notion about many. I don’t even know where I came across this one, it turns out. 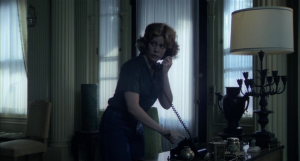 Though it wears out its welcome here and there – the visions get a bit repetitive, and Robin Groves gets a little too hysterical a little too often – it’s a bit better than you might expect. 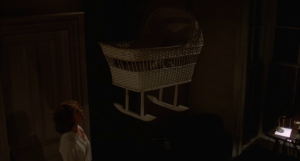 Not only are there a few moments of supernatural activity that more or less just produce giggles – they seem superfluous and silly, even in what is essentially a ghost story – but there’s a car chase featuring fake car-chase sounds! And other ersatz automotive audio effects! I honestly cannot recall ever experiencing such a thing before; it’s extremely obvious, and it’s hilarious. Aside from this mainstream foray, producer/director/co-writer Weston worked almost exclusively in the adult-film world. Despite that, this venture is not particularly sleazy, even with a “house of ill repute” subplot.

Rating From Outer Space: B−