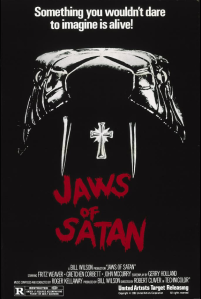 This entertaining incompetence spotlights an endearing and enduring theme enrapturing schlock filmmakers since time immemorial – the Giant Deadly Snake that strangely resembles … an ordinary snake. (Decidedly not a giant one, either.) By the end of this ridiculous romp, we are supposed to believe the snake – a defanged cobra whose subordinate serpents get to be represented by blatantly superimposed hissing on the soundtrack – is actually Satan Himself. We are never told why, just as we never learn anything about the supposed familial curse dogging our beleaguered priest. But at least we get an analogue for our current times, as the local business big shot and his mayoral pal do their damnedest to circumvent a curfew that local health officials try to impose. “There have always been snakes in this area,” the dog track proprietor grumbles. But when his daughter, Christina Applegate, is bitten, well, his wife changes his tune tout de suite. Longtime TV producer/director Claver (Charles in Charge! The Munsters Today! Small Wonder!) applies his small-screen acumen to what appears to be his only feature-film directorial credit.

A picture about a GDS that invokes Satan ain’t getting ignored around here. 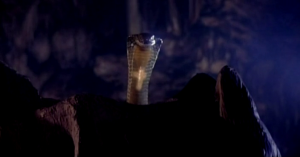 Small Wonder somehow lasted for 96 episodes. The world is a strange and awful place sometimes. This production, meanwhile, features a burgeoning romance between the local doctor and her imported herpetologist as a subplot. The facial snakebite makeup is appealingly grotesque, the priest seems to smirk a lot, and dammit, that dog track means revenue, and it’s gonna open. Whatever scene he’s in, the sheriff is marvelously unconvincing.