Though this would appear to be a straightforward picture about a monstrous winged serpent randomly attacking New Yorkers, it’s actually the tale of an Aztec death cult that has managed to revivify its god Quetzalcoatl to … randomly attack New Yorkers, apparently. With that setup, this bonkers production is patently ridiculous on one level, obviously, but it’s buttressed immensely by the contributions of David Carradine, Richard Roundtree, Michael Moriarty and others. (Moriarty’s Jimmy Quinn alone presents quite the psychological study.) With several of the winged serpent’s attacks being blatantly – and thus amusingly – similar, this green-screened stop-motion monster extravaganza even manages to throw in an undercover cop purporting to be a mime. Larry Cohen, ladies and germs.

A movie called “Q” about an inexplicable threat to ordinary citizens appealed to my sense of irony, or something. (Coincidentally, Moriarty is an expatriate American holding Canadian citizenship who once claimed he was starting a third party for “serious conservatives,” The Realists.) 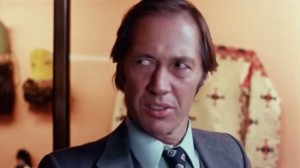 Should you Watch This Movie?

Cohen knows how to make an entertaining film. 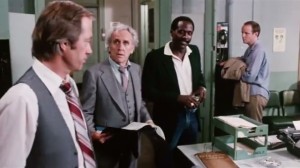 POWELL: “What I want to know is, how the hell does this tie in with the murders and the mutilations?”

HEPARD: “Well, that’s what brought it back … awakened it from its … centuries of sleep.
This thing has been … prayed … back into existence.”

Hmm, maybe it’s not an accident this flick is called “Q” after all. Do your own research, people. Six-time National League All-Star Ron “Penguin” Cey, who played the last of his 12 seasons with the L.A. Dodgers in 1982, has a small role as “Detective Hoberman.” Was this a sly
reference to longtime Village Voice film
critic J. Hoberman? DO YOUR OWN RESEARCH.

Rating From Outer Space: B+