written and directed by LARRY COHEN 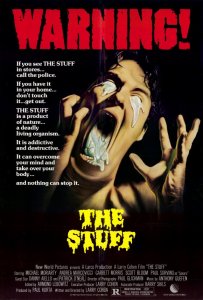 Here – if you don’t know – is your basic Body Snatchers tale about a, um, parasitic dessert. Well, it isn’t really a dessert, but it’s being sold that way at the behest of a secret business cabal whose profit motive compels it to ignore that it turns people into … something or another, somehow. Unless (or until) it kills them. As it proceeds, this flick rather unexpectedly invokes Colonel Kurtz from Apocalypse Now, while also managing to be evocative of Stripes, which requires a certain deftness. It’s also got some kinda shadow government thing going on, a rogue former FBI agent whose motivation remained unclear to me, a public relations and/or advertising maven as an uninteresting love interest, often laughable FX, a child actor in a lead role, and a strangely laid-back demeanor on everyone’s behalf, considering that, you know, the existence of the human race is being threatened by deliciousness on behalf of Big Confection.

It’s a Larry Cohen picture, or hadn’t you noticed?

It’s fun, and not notably demanding. 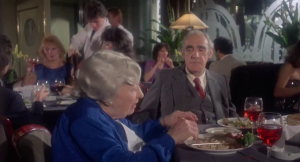 Satirical moments abound here, and they’re often pretty sharp, but the detritus of the 1980s cultural milieu contributes plenty of its own zest. At times, scenes seem to have been completed well after being shot, with conspicuous use of green screens, superimposed effects, and the like. (Trying to induce terror via a whipped cream-like substance has its perils.) Occasional FX involving body deterioration is actually pretty effective, though, especially in a questionably timed demise during the film’s climax. Superlative is the scene featuring an exploding The Stuff establishment stationed between what resemble McDonald’s and Kentucky Fried Chicken eateries from a model train setup.

rating from outer space: b–