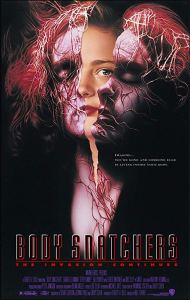 Well, I was certainly unaware they’d ever made this adaptation of the hoary classic. A thoroughly modern retelling – circa its ’90s setting – it’s mostly unnecessary, and though it tries to evoke the kind of slowly dawning realization that humanity is doomed (DOOMED, I tell you!) that pervades the original and its 1978 remake, the moment is effectively subsumed by the bitchin’ revenge sequence, and not reinvigorated by the predictably ambiguous ending. I will give it credit for engaging in some action that would totally not pass muster in these jingoistic times, but not for underutilizing Meg Tilly. Too slick and stylized, in the then-modern mode of a moody music video, and with its suspense consistently undercut by the ease with which one can identify who the good guys are. Not too sure why somebody thought this was necessary.

First, I was all like, wait, they made another version of that? And then I noticed who directed it.

It’s a curiosity and nothing more.

Along with featuring its heroes blowing up Army bases and troops, another little wrinkle that would be a no-go taboo today is that although Gabrielle Anwar’s character in the story is 17, she has a nude scene. I guess the most affecting parts of the flick rely on the barely explored family tensions, because surely the unexplained existence of the now-aquatic pods and the largely ignored military hierarchy don’t carry much weight. How the replicated humanoids detect and alert their kind to the existence of humans in their midst is completely laughable and generically evocative.