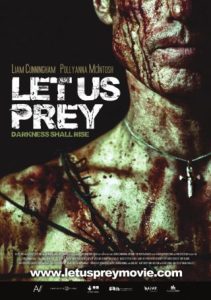 No, Marsha, I did NOT expect that I would be watching a morality play when I dialed up this Scottish/Irish co-production set mainly in a single location, that being a police station or whatever the hell they call it in their peculiar dialect over on the Auld Sod, distinctions further muddled by their brogue so that occasional lines of dialogue flew right past these bewildered and dB-damaged American ears. A morality play this is, however, about the souls of the guilty being claimed by You Know, in this case with the able yet hitherto unsuspecting assistance of a human female, played by The Woman herself, Pollyanna McIntosh. Prey starts out weird and goes completely off the deep end, along the way calling to mind such other amusements as Ash vs. Evil Dead; Willem Dafoe as Sgt. Elias in Platoon crossed with Bobby Peru in Wild at Heart; The Canal (another Irish horror of the same vintage); and maybe an Australian or Kiwi film or two. If I can find any real complaint with this occasionally heavy-handed entertainment, it’s often a little too theatrical. The “morality play” identification is apt in multiple senses.

WHY did i watch this movie?

I found it while looking for something else and thought it sounded interesting, especially as I rather enjoyed the aforementioned Irish picture.

If you do, see how many other films it conjures up for you, and we’ll compare.

Escalating audaciously, the deliberately paced reveals of the various skeletons stashed in the characters’ closets match nicely with each’s slowly dawning realization of his or her predicament. One negative is the above-noted lack of verisimilitude; the action never surpasses masquerade.