Isn’t it always rewarding to come across a production in which one literally can see the wires attached to objects in special FX shots? And shouldn’t more remakes or reboots or whatever you want to call them be handled like last year’s version of this Indonesian chestnut? Yes, they’re very similar, even containing some directly parallel scenes, but the overall story – and to some degree the theme – differs noticeably. I must concede that the newer version is more frightening, partly due to some assuredly unintentional camp here in the original. (Renditions of lurching undead are suitable for an elementary school talent show, for instance.) Still, it’s inarguably eldritch, and although a certain disregard for logical sequencing prevails, as a ghost yarn it’s effective and interesting. Less conspiratorial than the retelling, but with more apparent Muslim evangelism.

For purposes of comparison.

I would say so, but as it has yet to see release for the English-language market, discrepancies between various encodings and media players may befuddle the subtitles.

Great moments abound herein, to the extent that I considered making this review nothing but a screengrab essay of sorts. The main ghost, Mawarti, is more than disturbing enough,

and the nefarious nature of Darminah, the diabolical agent of a housekeeper, is delightfully broadly drawn. 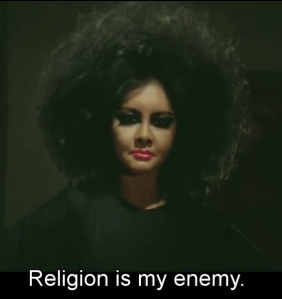 Oh, and the soundtrack is terrific, blending elements of musique concrète with the principles of free jazz at times; along with the sounds of haunting and weather events and so forth, it’s a treat. Continuity is sometimes an issue: for instance, when the undead boyfriend Herman first reappears, he has fangs,

but in his later return he does not, although at that point he begins to act vampiric. As alluded, the FX can be facile. 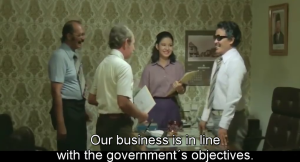