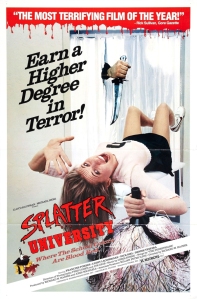 I guess I gotta admit that this objectively terrible movie is right in my wheelhouse, because although it’s completely, laughably awful, I can’t bring myself to pan it outright or consign it to the trash heap with some of the others I’ve slagged around here. But make no mistake – it’s not good, at all. The murder scenes are almost all exactly the same: character opens door, character sees knife brandished by unknown attacker, character gets stabbed in the abdomen, character dies. (The identity of the killer is easy to deduce, as well.) Many if not all of the characters are ridiculously exaggerated stereotypes, and attempts to portray “campus life” are in a similar vein. The only reason I imagine anyone would want to watch this movie is to remember a bygone era of moviemaking. The DIY ethos that the seventies made necessary in many areas of the arts was of considerable value … even if the artifacts it produced may not have been. 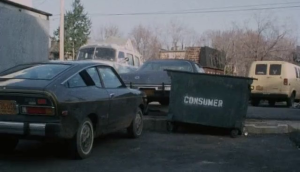 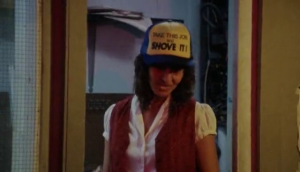 This picture was largely filmed in 1981, the credits at the end seem to read “1982,” and Troma eventually released it in 1984. Its entry on Horrorpedia includes the director’s explanation that to make it feature-length and “marketable,” a new beginning and ending were grafted onto it along with the abysmal attempts at wacky collegiate humor.

As the credits rolled, I noticed the name “George Seminara” and thought, wait, the George Seminara? Yep, that one. The names of the Three Stooges are borrowed for character monikers, which amused me. Oh, and the lead role is played by “one of the most sought after female keynote speakers in the country.” 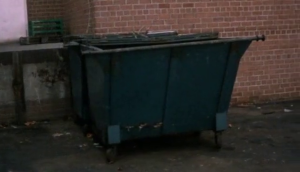