I’m not entirely sure what kind of movie Botchco Films was going for with this one, and I suspect they may not have known, either. A scene or two notwithstanding, it’s not really fearful enough to be considered a true horror, its humor is often too subtle for it to be deemed an out-and-out comedy, and it doesn’t quite cut it as a hybrid, either. Plus, there’s sort of a weird noirish angle going on, too. Despite the misgivings such observations might engender, however, when you consider that the plot of this film concerns the principals of a company called “Botchco Films” trying to make an ethically questionable, budget-challenged movie with a performer who may or may not be from the adult-film world – and continually debating the related semantics of their predicament and their art – it should seem more inviting. And one of the characters winds up literally in Hell, so there’s that. Though no particular angle suggests itself as the driving impulse behind this concoction, maybe the meta nature of Botchco Films including itself in its fictional world is just that purposeful. Whoa, man, deep. 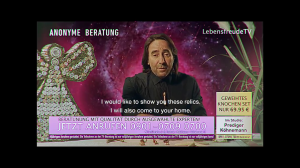 It’s a little lightweight, to be honest. And strangely enough, it kinda reminded me of Jim Jarmusch flicks from time to time. (Speaking of which, The Dead Don’t Die.)

The banter between the producer and the director is really pretty entertaining throughout, and their general haplessness is also amusing. Given the subject matter, though, the production is a little too tame for the most part, apart from one particularly gruesome effect. A sneaky twist ending comes unforeseen, which was appreciated.