written and directed by scott vickers 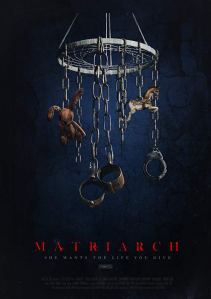 For a picture with nary an original idea, this production set in Scotland ended up being a taut, gripping, well-paced story, with a twist here and there – some interesting, some incredulous, and some superfluous – to differentiate it from the pack … slightly. Overall, however, very little happens in this flick that you haven’t experienced before, except for maybe the nearly impenetrable Scotch accents of a pair of extremely minor characters. (Seriously, I could have used English subtitles for their dialogue.) On the plus side, it’s very well filmed, acted and directed and all that. But c’mon, this is the synopsis: “An expecting mother and husband crash their car in the countryside and are offered shelter by a farmer and his wife. Soon they realize,” etc. I suppose the intense Christianity of the rural family qualifies as an innovative attempt, but let’s face it, twisting the orientation and bearing of religions and the religious isn’t exactly a brand-new concept for a horror movie, either.

Well, it didn’t seem to involve demonic possession, so that was a plus.

I mean … it has its moments, but it just kinda follows the template, really.

a tense and gripping scene

The isolated family is very effectively creepy, particularly the taciturn father played by Alan Cuthbert, who expresses malevolence with naught but his baleful silence at times. What could have been an overwhelmingly terrifying sequence was mostly spoiled by a dire lack of acceptable realism, however, and what may have been intended as a SHOCKING twist at the conclusion just falls flat. One minor unexpected revelation manages to be humorously chilling, and the dismal ambience is effectively sustained.