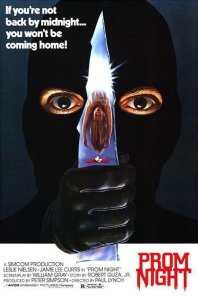 This is kind of an old-fashioned picture, in my opinion, and why shouldn’t it be, you think, it’s almost 40 years old. What I mean, though, is that it seems kind of old-fashioned for 1980. With an almost quaint sense of pacing and development, along with some hilariously questionable plot turns or stratagems, even the brief nudity seems perfunctory. With a quasi-sociological examination of “high school” students, the character development really seemed lacking to me, given that at least one motive’s established for what appear to be revenge killings, yet the culpable characters eventually become somewhat sympathetic. (I briefly debated if this was instead a brilliant gambit before I regained my equilibrium.) Not a whole lot of fun, really, aside from the amusement of the paltry turnout for the “Disco Madness” prom scenes. 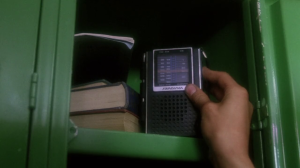 It really only holds up as an opportunity to enjoy certain horror movie tropes, even if it does try to create a more interesting story, to variable effect.

Admittedly, there’s a lot to appreciate here, from the KISS poster in the school cafeteria and attendant photos in one girl’s locker (for the sake of argument, this is what KISS was up to at the time), to the aforementioned disco theme, to the inexplicably exploding van,

to the half-assed attempt at establishing red herrings, to the ineffectual police procedures, and on and on. Unfortunately, it never gets too interesting and we don’t care much about any of the characters. The first murder scene is unexpectedly horrific.