written and directed by jack woods

Of the many mysteries this inspired flick presents, perhaps none is more pressing than why in hell it’s called “Equinox.” A scatterbrained adventure of sorts, it unfolds as a long and involved tale of why a guy named Dave now resides in a sanitarium. Seems Dave, his friend Jim, Jim’s girlfriend and Dave’s blind date all went out looking for a certain Dr. Waterman, only to encounter all manner of bizarre things. These include a crazy old man living in a cave; a strange forest ranger who calls himself “Asmodeus”; a disappearing castle; an ancient book of weird incantations and illustrations (which we should find very familiar); 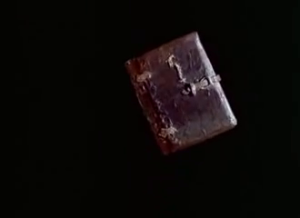 a passage to a different realm; a Kong knockoff; another giant creature; what may be intended to be The Devil himself; and lots of other fun stuff. The dialogue is of course cardboard flat and the acting no better, but this preposterous affair’s a real throwback pleasure.

I found it on YouTube quite by accident, and a brief inquiry made it a must-see.

They quite literally do not make pics like this anymore, such as that cannot even be called “B” movies, and its independence alone is appealing.

As hinted above, it seems fairly obvious that Sam Raimi and crew must have seen this film at some point before they made The Evil Dead, just as it’s obvious that Jack Woods et al. were familiar with works such as, oh, I don’t know, Earth vs. The Flying Saucers. For trivia fans, Jim is portrayed by the future Herb Tarlek, and co-producer/writer/director Dennis Muren would eventually work on blockbusters such as E.T.