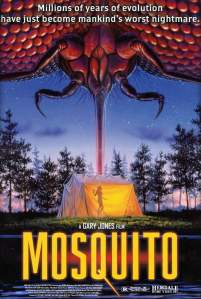 The sort of low-budget affair during which you’re never not acutely aware you’re watching a movie made on a shoestring, this off-brand extravaganza survives on the chutzpah of its gigantic insect puppets and a game cast of people who seem as though they’ve never acted before. At least on film – the irrepressible Mike Hard plays a small role as part of a criminal element, for instance. Meanwhile, as a major character, late-career sometime actor Ron Asheton does a credible job, especially by the standards of the surrounding evidence. The typically absurdist plot – alien spaceship crashes in swamp, mosquito sucks alien blood, mosquito grows humongous, everyone dies – was thankfully pared down by fiscal realities. “That’s some science fiction bullshit,” Asheton’s character Hendricks accuses. “No,” he’s told. “You are living in science FACT.” This picture allegedly has become a cult favorite, and if so, that cult must really be starved for entertainment. 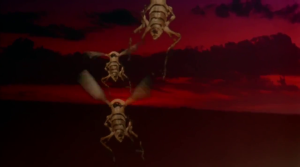 I had just finished Jim Jarmusch‘s Stooges documentary Gimme Danger, noticed the billing here and thought, “That’s one hell of a coincidence.” 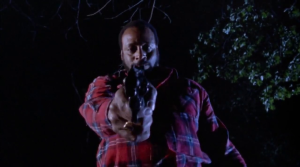 It’s really lousy, but if you’re in the right frame of mind you might not care much. 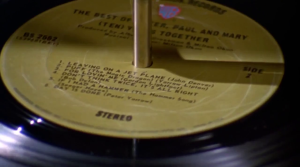 Not that it was a concern to begin with, but the closer this production gets to its grand finale the less anyone involved even winks at verisimilitude. Case in point: our heroes jump off the roof of a house to escape the teeming parasitic horde, suffering no ill effects from a conspicuously soft landing. Plus, a certain lack of passion and effort becomes more noticeable as things … progress. Rebuttal: “Just as I expected – those mosquitoes are making these bodies radioactive.”