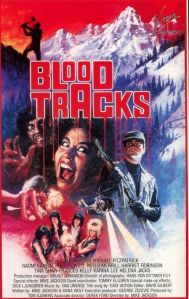 What starts out appearing to be merely a lighthearted, empty-headed (Swedish!) hair metal adventure turns out to be a plodding formulaic exercise beholden to dangers lurking in a poorly lit, seemingly abandoned building. Actually, back up … the adventure begins with an introductory vignette that makes little sense as it happens and manages to make even less sense later. (A woman fatally wounds her abusive … husband? Landlord? Prefect? Naturally, she and her children must hide from society forevermore.) This idea must have looked good to somebody on paper – rockin’ rock band, video hi-jinks, naked chixx, the aforementioned dangers lurking in a poorly lit, seemingly abandoned building, and so forth – but on film it quickly grows rather tedious. Neither the atrocious dubbing nor the copious gratuitous nudity provides any succor. 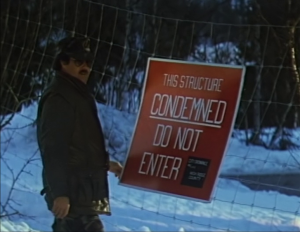 I was suckered in by the “promise” of yet another asinine “metal”-themed fright flick. (I’m not even sure if I was aware of the Swedish angle.) 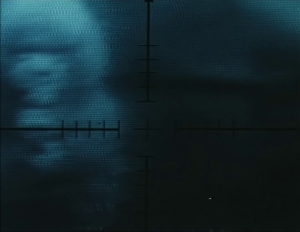 I’ll say this: it’s no Black Roses or Rocktober Blood. Hell, it isn’t even “Rock ‘n’ Roll Nightmare.” I suppose if you’re really feeling nostalgic for images of purported glam-metal excess, this may suffice –but may I suggest seeking treatment instead? 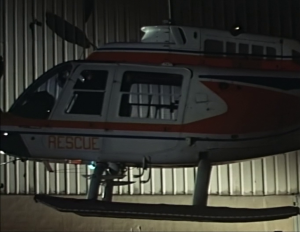 It’s possible I’d be inclined to point out a creatively grisly murder or two, but at least one of them is unfortunately edited in such a way as to severely diminish its impact. The SPECIAL APPERANCE (sic) by EASY ACTION – not this one – who portray a band called “Solid Gold” – not this one – somehow manages to undermine the dignity of poseur glam.

Don’t just take my word for it, tho! 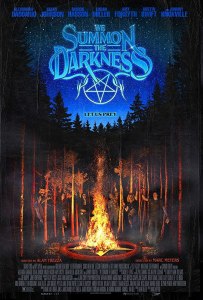 I’m not sure it makes any sense that this film is set in “1988,” at least not for contemporary viewers who don’t remember the era. The “Satanic Panic” that gripped media and for a time engulfed the practitioners and fans of heavy metal isn’t really represented here, and hardly any attention is paid to the actual sights and sounds of the moment, either. So what you have is a story that primes the audience for what it hopes is an unexpected reveal, and after that it becomes just another survival saga. The setup: three chicks head to a metal concert (where a band pretends they’re performing “Black Funeral” by Mercyful Fate), meet three dudes, and proceed to a big house for an afterparty. But someone’s been ritually slaughtering people, oh no. Elements of humor suggest themselves but don’t really go anywhere, and if you cannot predict several of the events in this flick … Hey! Welcome to the world of horror cinema!

I hadn’t been too interested, but positive acclaim persisted.

The female trio consists of Texas Chainsaw 3D‘s Alexandra Daddario, Maddie Hasson from God Bless America (not that I recognized her), and Amy Forsyth from Hell Fest, which yet awaits its own compelling campaign to stoke enough
interest in me.

Once the maleficent plan starts to leak and burn oil, it should probably be a lot funnier than it is. Once the grand scheme is revealed, you will likely not be surprised to hear, it contains some serious gaps in logic. A key moment from the conclusion also beggars belief. This is not a retro ’80s picture; it’s just (nominally) set then. 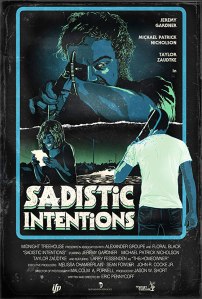 Plot twists, or maybe thematic twists, are pretty much this film’s modus operandi, and for the most part, they’re not all that predictable – and even the ones that are receive a little tweak. At about three-quarters of the way through this fable, I thought that what may have been intended to be some sort of dark comedy was about to veer into a disturbing realm that few films ever broach. Such a move would have been disheartening, nay, dispiriting, and it was with a palpable sense of dread that I waited to see if the director had chosen that path. Nope. He didn’t entirely cop out, either, however, so that was refreshing. But – this could have become a really remarkable examination of how things can spiral out of control and seemingly ordinary people can become trapped by circumstances and wind up making absolutely terrible, life-shattering decisions. In one sense, it still is, only the profound lack of empathy at its core finishes much differently. The actual ending is disconcertingly funny in its own special way.

Well, the trailer was intriguing, though I wavered for quite a while because I had envisioned something more ironic and postmodern.

A guy invites over his bandmate and a prospective drug buyer; they don’t know each other. And where is he, anyway?

Right, there’s only three people in this picture, and two of them are tremendous. The third, however, basically channels Crispin Glover, which is fairly distracting. This T-shirt, however, was jaw-dropping:

I haven’t been so envious in a long time. Oh, yeah – this movie involves death metal, mostly as a framing device.